I’m humbled and honored to be among the nominees for the 2018 World Press Photo awards for my National Geographic story “Warriors Who Once Feared Elephants Now Protect Them.” Thank you to all my friends at Reteti Elephant Sanctuary Community United for Elephants for trusting me to share your powerful story, to my editors Alexa Keefe and Sarah Leen for giving us the platform to share it and now to World Press Photo, for further casting the light on this important story of community and conservation.

I was awarded a World Press Photo, Second Place, Nature, stories, in 2017 for “Pandas Gone Wild.” In 2015, I received a Second Place, Singles, award in the World Press Photo Nature category for Orphaned Rhino, which is also from my body of work on Northern Kenya, like this year’s prize. This work is a long term examination of the change in the relationship between people and animals in the region.

In the photo above, Joseph Lolngojine, a Samburu warrior turned elephant caretaker, watches over Kinya. Moments after this photo was taken, it was decided to bring her to the sanctuary to try to save her life.

Please have a look all of the World Press Photo stories. Some will break your heart, others may make you laugh and hopefully inspire all of us to work harder to find solutions to our planet’s most pressing challenges. This year, World Press Photos will announce the winners at the Awards Show in Amsterdam on April 12, 2018.

Shortlisted for the main prize are five photographers, Patrick Brown, Adam Ferguson, Toby Melville, Ronaldo Schemidt and Ivor Prickett with Prickett nominated for two separate images shot in Mosul. World Press Photo launched a new code of ethics for entrants, which means that images submitted to the prize have been thoroughly checked before the shortlists have been announced. 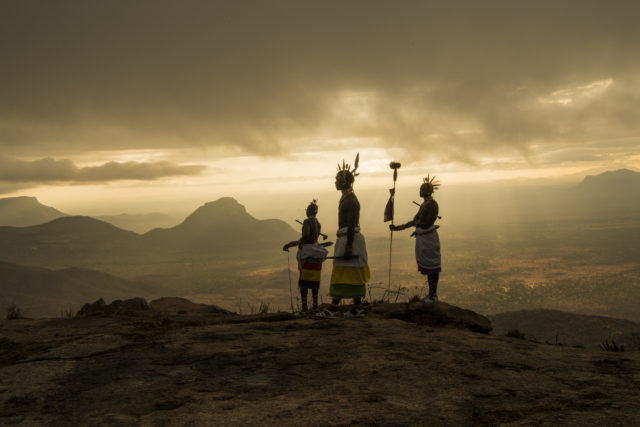 Please see my new work in National Geographic Magazine which will be published in the August, 2017 issue of the magazine about an elephant sanctuary in Northern Kenya. What makes it so special is that it is owned and operated by the indigenous Samburu community. It was a privilege to be allowed into this sacred place. In a world where we often focus only on the things that divide us, it’s important also to talk about the solutions and a way forward. The indigenous people living side by side to the wildlife hold the keys to saving what is left. Please considering visiting  Kenya or even contributing to the sanctuary. Link is at end of this story.

Check out this month’s issue of AFAR travel magazine and the story “COFFEELAND” by writer David Farley. This was an epic journey across Ethiopia tracing the origination of coffee that goes back to the thirteenth century. Legend says that a herder named Kaldi noticed his goats “dancing” after nibbling bright red berries. Kaldi brought the berries to a nearby monastery where holy men declared they must be the work of the devil and threw them into a fire. Yet, the aroma was too tempting and they quickly raked the roasted beans from the embers, ground them up, and dissolved them in hot water, yielding the world’s first cup of coffee.

This journey did not involve dancing goats but I did travel with brilliant coffee expert Geoff Watts from Intelligentsia coffee and the incredible people from TechnoServe who taught me more than I could ever imagine about my favorite beverage. I also got to meet farmers who showed me what they believed was THE ORIGINAL COFFEE TREE. This happened  in two different villages and there seems to be some debate over which one holds the original tree. Wherever the truth lies, I do know that the culture around coffee in Ethiopia is a serious affair. Its much more than gulping bottomless cups on the go. For those who’ve been invited to a coffee ceremony, it the highest possible gesture of respect and friendship. If you are attending an Ethiopian coffee ceremony, be prepared for a long wait. A traditional ceremony can last a couple of hours and it feels like a spiritual ritual as incense is burned and the grounds are brewed three times.  The first round of coffee is called awel, the second kale’i and the third bereka which actually means ‘to be blessed’.

The experience and knowledge changed the way I will ever think about coffee. Here in the USA, we sling it back but after witnessing first hand the tremendous energy and love it takes to get the best beans to market,  I came back a changed woman. And on the advice of these coffee experts, my french press is now sadly sitting in the back of the closet and we are brewing coffee by hand with the best roasted Ethiopian coffee. Here are some of the images from the trip but pick up a copy of Afar to see the whole story.

Nikon recently interviewed me for their Nikon Professional Services blog. Here is an excerpt.

Traveling the world and moving from one locale to the next, “clicking” pictures of beautiful places and lovely people. You may ask yourself: “How hard can it be?” Let me tell you from experience: it’s a tough job if you are serious about it, and you have to be serious about it if you want to make a living at it. The truth is, very little “clicking” happens. That is about ten percent of the job. The rest is sheer hard work, planning, researching, editing, negotiating and finding unique ways to tell stories. The trick is to get access to places that no one else can get to, and the secret to this is to know your subject better than anyone else. So my advice to those who dream about this is to find a story close to you – maybe even in your backyard – and make it yours. You don’t need to travel abroad. What you do need to do, however, is tell a story better than anyone else can, using your own unique perspective. If you find your own story and show complete and utter dedication, then you will find a way to carve out a career.

I recently returned to the West African country of Guinea-Bissau on a generous grant from the Alexia foundation to revisit a village where I began my career as a photographer ten years ago. Young and very green, I had applied for a grant from them back in 2000, on a whim. To my delight and horror, I got it – even beating out some National Geographic photographers I heard, who had also applied that year. I had no idea what I was doing and was terrified. But the foundation felt there was something special about my proposal to document a small village in an unstable country torn apart by war. They took a risk on me back then and changed the course of my life.

Flash forward to 2011, and not much has changed in Guinea-Bissau. Bullet holes still pockmark the elegant facade of the presidential palace, its gutted interior still blackened by bombs from a civil war fought over a decade before. One aid organization working in the area has unearthed approximately 3,000 anti-personnel mines in the capital and is still digging up unexploded ordnance in the countryside. Corruption, a devastated economy and continuing instability continue to erode the urban center, while crumbling infrastructure and skirmishes with separatists in neighboring Senegal have caused thousands of civilians to flee border areas. Despite my experiences working in such places, returning felt just as terrifying as when I first arrived ten years ago.

Guinea-Bissau is a forgotten state. Few flights arrive here each week, aid agencies are scarce, and now the country is being called Africa’s only narco-state, a nation controlled and corrupted by drug cartels. As a recent U.N. report concluded, it has everything criminals need: “resources, a strategic location, weak governance and an endless source of foot soldiers who see few viable alternatives to a life of crime.” Many fear this will further destabilize the already volatile country.

Even getting a visa was a challenge. Every phone number I found for a consulate or embassy was disconnected, and flights to neighboring Senegal had been canceled for weeks due to conflict near the border. I finally came across a number in New York. The woman who answered was the UN representative, running the consulate out of her home for the last seven years because the country was too poor to pay rent for an office. After a few questions, she paused: “I know you,” she said, laughing, “You sat next to me on the plane to Bissau 10 years ago. I still have a photo of you with my daughter.” I was shocked. This was a powerful reminder that despite all the problems, it’s the people who make a place special, and it is personal connections that help me through obstacles.

Once I landed, my fears washed away. I once studied Pulaar, the local language, and now I was putting it to good use, remembering all its elaborate greetings. This was the single most important thing I could have done to prepare for my trip. It kept me safe. As I took public transport to the village, my fellow passengers stared at me with shock and delight. They were so thrilled that a foreign woman would know some of their language that I could tell right away no one would ever harass me. Instead, I was met with laughter, smiles and gracious offers to carry my belongings. The women in the village saw me first and began running to greet me. I cried, they cried, we laughed and settled in for the night. I spent 12 days there, listening to their stories and taking photos.

I learned on my first visit that every day is a struggle for Guineans, but I was mesmerized by the people who gave so much to open up my eyes to the beauty and sadness of their lives. Through it all, I was reminded of how similar we all are despite the distances between us.

On my last evening in 2001, I sat with a group of children beneath a sea of stars talking into the night about my return home. One of the children, Alio, innocently asked me if we had a moon in America. It seemed so symbolic and touching that he should feel like America was a separate world. I was able to meet Alio again this time around. Now he is a young man with a cell phone and a worldly vision. I asked him if he remembered our conversation about the moon. He laughed shyly and said, “Yes, I know now – we share the sun and moon – but here you are our guest, so we will share ours with you.” Once again I was reminded that no matter how desperate and impoverished a place may look, the truth is that nearly everyone on this planet shares the same values. I see a lot of people with common notions of kindness, peace, generosity and a sense of community, and the moon serves as a constant reminder that we are all tied together in an intricate web, whether we believe it or not.